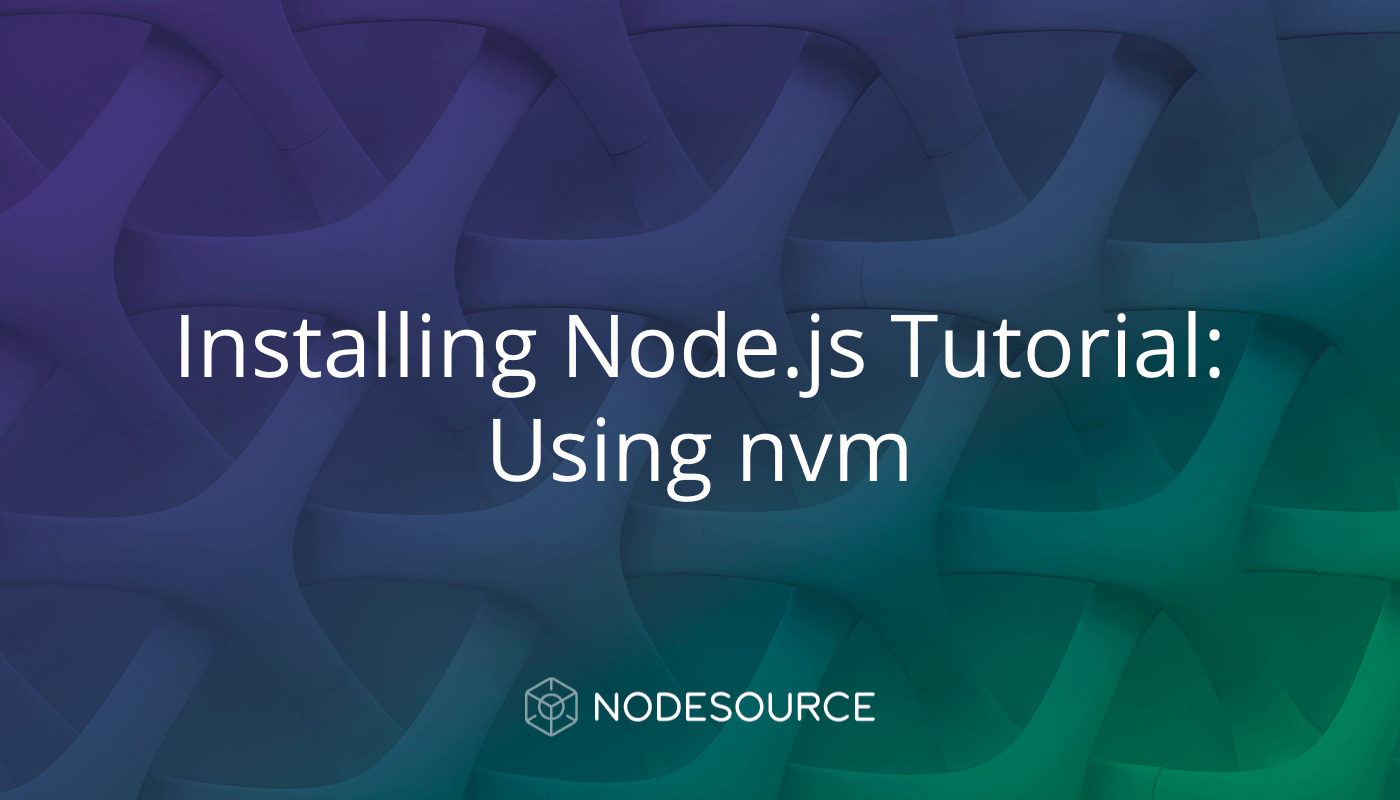 This article was first published in NodeSource blog on January 2017.

As with any programming language, platform, or tool, the first step to using it is getting it installed. Many of them typically come with a speedy way to upgrade when a new version is available.

By default, there's not a way to upgrade the version of Node.js you've got from within Node.js itself. That said, there's a fantastic tool for the community called nvm that allows you to manage the versions of Node.js that you've got installed locally.

In this quick tutorial, we'll take a look at how to install nvm, and then how to start using it as your version manager for Node.js. Once we've completed the tutorial, you'll be ready to take the next step with Node.js.

This guide covers installing nvm on macOS and Linux - note that all versions of Node.js may not support every version of macOS or Linux.

Step 1 (Optional): Ensure your system has the appropriate C++ compiler

In some cases, like when installing Node.js releases from their source or installing versions of Node.js before 0.8.6 (when the project started shipping binaries), you'll need to ensure that your system has the appropriate C++ build tools.

For LTS and modern releases, you will not need this step. That said, it's a nice to have to ensure that the majority of requirements are met in any scenario.

On macOS, you've got two options for a C++ compiler: the full XCode application or the stand-alone Command Line Tools portion of Xcode.

To get these on macOS, you can follow these steps:

On Linux, the C++ compiler will vary from distribution to distribution. For example, on Debian and Ubuntu, you'll need to install build-tools and libssl-dev, but this may be different on your given Linux distribution.

To get build-tools and libssl-dev on Debuan and Ubuntu distributions, you can run these commands:

Once you've got the right C++ compiler for your system, now it's time to run the nvm install script. Here are the single-step install scripts for both macOS and Linux. You've got the option of cURL or Wget but both achieve the same result.

Note: If your Linux system doesn't have either cURL or Wget, you can run sudo apt-get install curl and use the cURL method.

Running the Install Script with cURL:

To install nvm with the cURL method, run the following command in your terminal:

Using the Install Script with Wget:

To install nvm with the Wget method, run the following command in your terminal:

After running the install script from Step 2, nvm should have successfully installed. To ensure that nvm is up and running on your machine, you can test it with the following command:

This command will return something like (though not necessarily exactly) the following:

Missing the nvm command after running the install script?

If you're using macOS, you may be missing a .bash_profile file - to troubleshoot this, you can run touch ~/.bash_profile in your command line and re-run the installer script.

If the problem persists after that, you can open the existing .bash_profile file (using your favorite text editor) and add the following line to it:

If you're still having issues, you can take a peek at this issue to find a discussion of the problem and a collection of possible resolutions.

Congratulations! You've now got nvm - a tool to easily allow you to manage and swap out the versions of Node.js you've got installed locally. Now, let's get you started with doing just that.

To install the latest available version of Node.js, you can use the following command:

Next, to use that version of Node.js in any new shell, you can simply run the use command:

To install the latest available LTS version of Node.js, you can run the following command:

And to use that latatestTS version of Node.js in any new shell, you can simply run the use command:

Now you've got a fantastic version manager for Node.js. It's time to start building!

Get unparalleled visibility into application performance and system health. Get started with N|Solid today

We've got some resources to get you kickstarted! Both the breadth and depth of the Node.js and the JavaScript ecosystems are quite large - in addition to the developer tools like NodeSource N|Solid and Certified Modules, we've got a ton of tutorials, guides, and articles to help you get kick started with Node.js.

If you're interested in keeping your code clean, maintainable, and collaborative, take a peek at our post on using ESLint for linting your JavaScript applications. Are you interested in building web applications with Node.js? One of the most challenging aspects of web apps is security - you can learn security best practices for Express to lock down your web apps, to prevent breaches and attacks. Or, maybe you want to deploy your Node.js apps with Docker? Then you should definitely read our article on dockerizing your Node.js applications.

That said, if you want to keep in touch with the Node.js ecosystem, you should follow @NodeSource on Twitter! We'll keep you updated with important news from the core Node.js project, fresh and useful Node.js tutorials, and more.