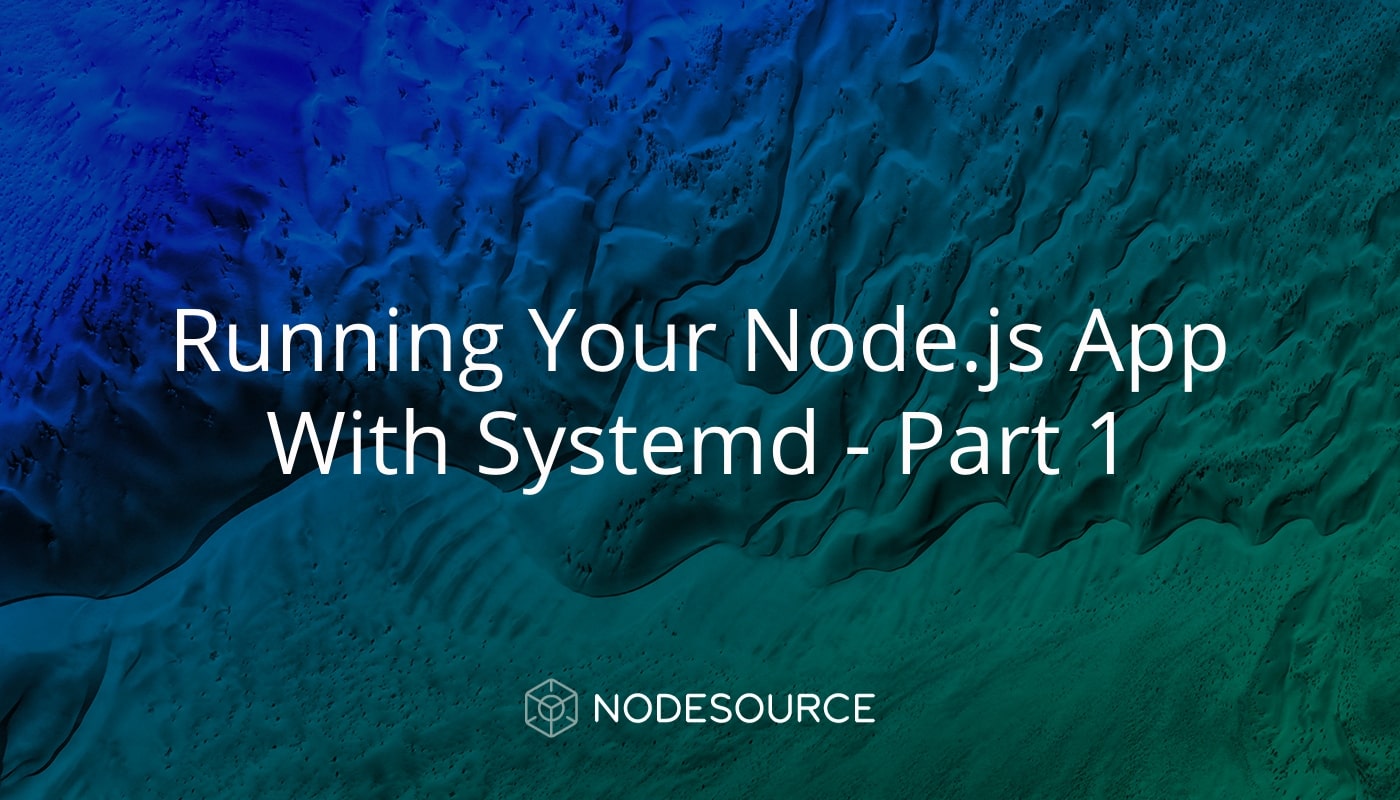 You've written the next great application, in Node, and you are ready to unleash it upon the world. Which means you can no longer run it on your laptop, you're going to actually have to put it up on some server somewhere and connect it to the real Internet. Eek.

There are a lot of different ways to run an app in production. This post is going to cover the specific case of running something on a "standard" Linux server that uses systemd, which means that we are not going to be talking about using Docker, AWS Lambda, Heroku, or any other sort of managed environment. It's just going to be you, your code, and terminal with a ssh session my friend.

Before we get started though, let's talk for just a brief minute about what systemd actually is and why you should care.

What is systemd Anyway?

The full answer to this question is big, as in, "ginormous" sized big. So we're not going to try and answer it fully since we want to get on the the part where we can launch our app. What you need to know is that systemd is a thing that runs on "new-ish" Linux servers that is responsible for starting / stopping / restarting programs for you. If you install mysql, for example, and whenever you reboot the server you find that mysql is already running for you, that happens because systemd knows to turn mysql on when the machine boots up.

This systemd machinery has replaced older systems such as init and upstart on "new-ish" Linux systems. There is a lot of arguably justified angst in the world about exactly how systemd works and how intrusive it is to your system. We're not here to discuss that though. If your system is "new-ish", it's using systemd, and that's what we're all going to be working with for the forseeable future.

I'm going to assume you have a fresh installation of Ubuntu Xenial to work with, and that you have set up a default user named ubuntu that has sudo privileges. This is what the default will be if you spin up a Xenial instance in Amazon EC2. I'm using Xenial because it is currently the newest LTS (Long Term Support) version available from Canonical. Ubuntu Yakkety is available now, and is even newer, but Xenial is quite up-to-date at the time of this writing and will be getting security updates for many years to come because of its LTS status.

Use ssh with the ubuntu user to get into your server, and let's install Node.

Next let's create an app and run it manually. Here's a trivial app I've written that simply echoes out the user's environment variables.

Using your text editor of choice (which should obviously be Emacs but I suppose it's a free country if you want to use something inferior), create a file called hello_env.js in the user's home directory /home/ubuntu with the contents above. Next run it with

You should be able to go to

in a web browser now, substituting 11.22.33.44 with whatever the actual IP address of your server is, and see a printout of the environment variables for the ubuntu user. If that is in fact what you see, great! We know the app runs, and we know the command needed to start it up. Go ahead and press Ctrl-c to close down the application. Now we'll move on to the systemd parts.

The "magic" that's needed to make systemd start working for us is a text file called a service file. I say "magic" because for whatever reason, this seems to be the part that people block on when they are going through this process. Fortunately, it's much less difficult and scary than you might think.

We will be creating a file in a "system area" where everything is owned by the root user, so we'll be executing a bunch of commands using sudo. Again, don't be nervous, it's really very straightforward.

and put the following contents in it:

Let's go ahead and talk about what's in that file. In the [Unit] section, the Description and Documentation variables are obvious. What's less obvious is the part that says

That tells systemd that if it's supposed to start our app when the machine boots up, it should wait until after the main networking functionality of the server is online to do so. This is what we want, since our app can't bind to NODE_PORT until the network is up and running.

Moving on to the [Service] section we find the meat of today's project. We can specify environment variables here, so I've gone ahead and put in:

so our app, when it starts, will be listening on port 3001. This is different than the default 3000 that we saw when we launched the app by hand. You can specify the Environment directive multiple times if you need multiple environment variables. Next is

which tells systemd how our app launches itself. Specifically, it lets systemd know that the app won't try and fork itself to drop user privileges or anything like that. It's just going to start up and run. After that we see

which tells systemd that our app should be run as the unprivileged ubuntu user. You definitely want to run your apps as unprivileged users to that attackers can't aim at something running as the root user.

First, ExecStart tells systemd what command it should run to launch our app. Then, Restart tells systemd under what conditions it should restart the app if it sees that it has died. The on-failure value is likely what you will want. Using this, the app will NOT restart if it goes away "cleanly". Going away "cleanly" means that it either exits by itself with an exit value of 0, or it gets killed with a "clean" signal, such as the default signal sent by the kill command. Basically, if our app goes away because we want it to, then systemd will leave it turned off. However, if it goes away for any other reason (an unhandled exception crashes the app, for example), then systemd will immediately restart it for us. If you want it to restart no matter what, change the value from on-failure to always.

Last is the [Install] stanza. We're going to gloss over this part as it's not very interesting. It tells systemd how to handle things if we want to start our app on boot, and you will probably want to use the values shown for most things until you are a more advanced systemd user.

Using systemctl To Control Our App

The hard part is done! We will now learn how to use the system provided tools to control our app. To being with, enter the command

You have to do this whenever any of the service files change at all so that systemd picks up the new info.

Next, let's launch our app with

After you do this, you should be able to go to

in your web browser and see the output. If it's there, congratulations, you've launched your app using systemd! If the output looks very different than it did when you launched the app manually don't worry, that's normal. When systemd kicks off an application, it does so from a much more minimal environment than the one you have when you ssh into a machine. In particular, the $HOME environment variable may not be set by default, so be sure to pay attention to this if your app makes use of any environment variables. You may need to set them yourself when using systemd.

You may be interested in what state systemd thinks the app is in, and if so, you can find out with

Now, if you want to stop your app, the command is simply

and unsurprisingly, the following will restart things for us

If you want to make the application start up when the machine boots, you accomplish that by enabling it

and finally, if you previously enabled the app, but you change your mind and want to stop it from coming up when the machine starts, you correspondingly disable it

That concludes today's exercise. There is much, much more to learn and know about systemd, but this should help get you started with some basics. In a follow up blog post, we will learn how to launch multiple instances of our app, and load balance those behind Nginx to illustrate a more production ready example.

This article was first published NodeSource blog post in November 2016