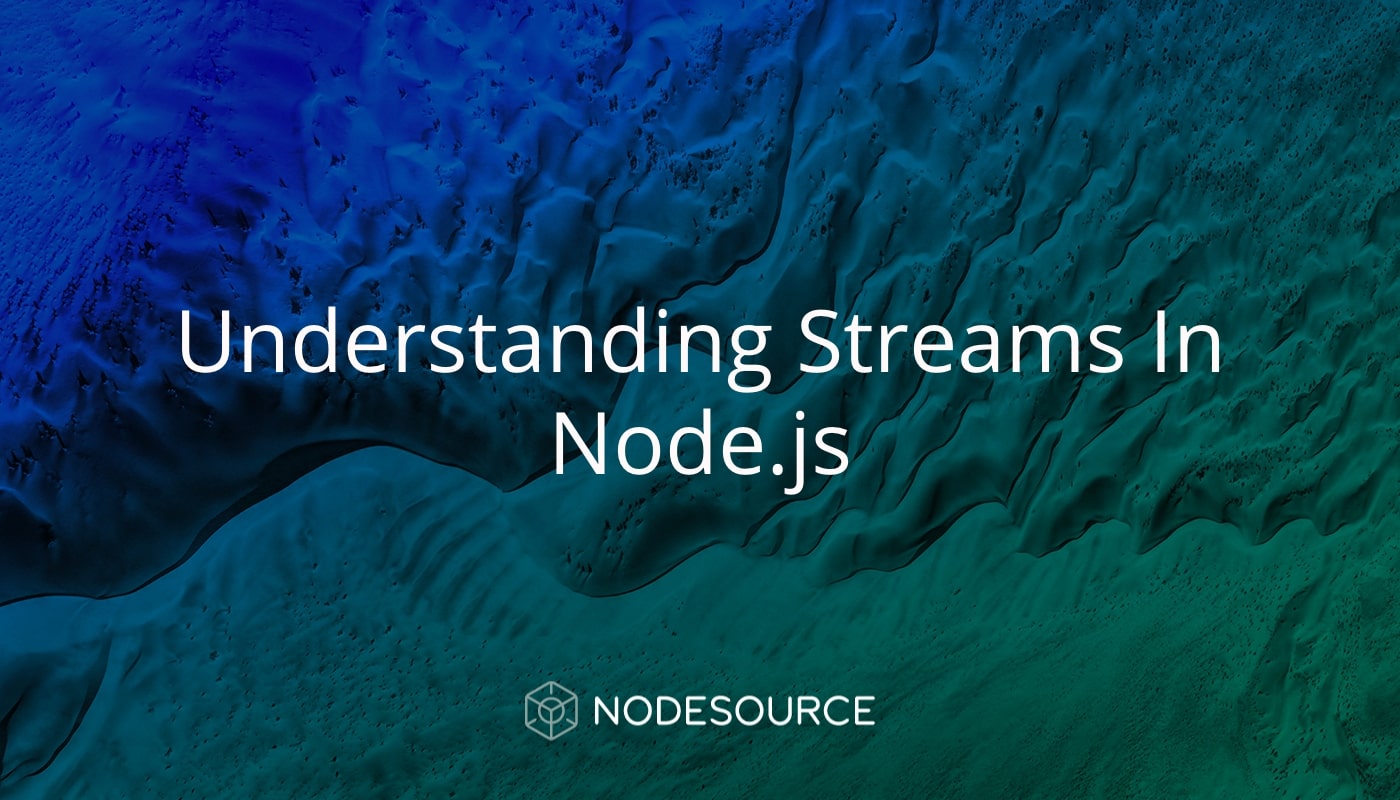 Streams in Node.js have a reputation for being hard to work with, and even harder to understand.

In the words of Dominic Tarr: “Streams are Node’s best and most misunderstood idea.” Even Dan Abramov, creator of Redux and core team member of React.js is afraid of Node streams.

This article will help you understand streams and how to work with them. So, don’t be afraid. We can figure this out!

Streams are one of the fundamental concepts that power Node.js applications. They are data-handling method and are used to read or write input into output sequentially.

Streams are a way to handle reading/writing files, network communications, or any kind of end-to-end information exchange in an efficient way.

What makes streams unique, is that instead of a program reading a file into memory all at once like in the traditional way, streams read chunks of data piece by piece, processing its content without keeping it all in memory.

This makes streams really powerful when working with large amounts of data, for example, a file size can be larger than your free memory space, making it impossible to read the whole file into the memory in order to process it. That’s where streams come to the rescue!

Let’s take a “streaming” services such as YouTube or Netflix for example: these services don’t make you download the video and audio feed all at once. Instead, your browser receives the video as a continuous flow of chunks, allowing the recipients to start watching and/or listening almost immediately.

However, streams are not only about working with media or big data. They also give us the power of ‘composability’ in our code. Designing with composability in mind means several components can be combined in a certain way to produce the same type of result. In Node.js it’s possible to compose powerful pieces of code by piping data to and from other smaller pieces of code, using streams.

There are 4 types of streams in Node.js:

If you have already worked with Node.js, you may have come across streams. For example, in a Node.js based HTTP server, request is a readable stream and response is a writable stream. You might have used the fs module, which lets you work with both readable and writable file streams. Whenever you’re using Express you are using streams to interact with the client, also, streams are being used in every database connection driver that you can work with, because of TCP sockets, TLS stack and other connections are all based on Node.js streams.

How to create a readable stream

We first require the Readable stream, and we initialize it.

Now that the stream is initialized, we can send data to it:

It’s highly recommended to use async iterator when working with streams. According to Dr. Axel Rauschmayer, Asynchronous iteration is a protocol for retrieving the contents of a data container asynchronously (meaning the current “task” may be paused before retrieving an item). Also, it’s important to mention that the stream async iterator implementation use the ‘readable’ event inside.

You can use async iterator when reading from readable streams:

It’s also possible to collect the contents of a readable stream in a string:

Note that, in this case, we had to use an async function because we wanted to return a Promise.

It’s important to keep in mind to not mix async functions with EventEmitter because currently, there is no way to catch a rejection when it is emitted within an event handler, causing hard to track bugs and memory leaks. The best current practice is to always wrap the content of an async function in a try/catch block and handle errors, but this is error prone. This pull request aims to solve this issue once it lands on Node core.

To learn more about Node.js streams via async iteration, check out this great article.

stream.Readable.from(iterable, [options]) it’s a utility method for creating Readable Streams out of iterators, which holds the data contained in iterable. Iterable can be a synchronous iterable or an asynchronous iterable. The parameter options is optional and can, among other things, be used to specify a text encoding.

According to Streams API, readable streams effectively operate in one of two modes: flowing and paused. A Readable stream can be in object mode or not, regardless of whether it is in flowing mode or paused mode.

In a flowing mode, to read data from a stream, it’s possible to listen to data event and attach a callback. When a chunk of data is available, the readable stream emits a data event and your callback executes. Take a look at the following snippet:

When there is no more data to read (end is reached), the stream emits an end event. In the above snippet, we listen to this event to get notified when the end is reached.

Also, if there is an error, the stream will emit and notify the error.

In paused mode, you just need to call read() on the stream instance repeatedly until every chunk of data has been read, like in the following example:

The read() function reads some data from the internal buffer and returns it. When there is nothing to read, it returns null. So, in the while loop, we check for null and terminate the loop. Note that the readable event is emitted when a chunk of data can be read from the stream.

All Readable streams begin in paused mode but can be switched to flowing mode in one of the following ways:

The Readable can switch back to paused mode using one of the following:

The important concept to remember is that a Readable will not generate data until a mechanism for either consuming or ignoring that data is provided. If the consuming mechanism is disabled or taken away, the Readable will attempt to stop generating the data. Adding a readable event handler automatically make the stream to stop flowing, and the data to be consumed via readable.read(). If the 'readable' event handler is removed, then the stream will start flowing again if there is a 'data' event handler.

How to create a writable stream

To write data to a writable stream you need to call write() on the stream instance. Like in the following example:

The above code is straightforward. It simply reads chunks of data from an input stream and writes to the destination using write(). This function returns a boolean value indicating if the operation was successful. If true, then the write was successful and you can keep writing more data. If false is returned, it means something went wrong and you can’t write anything at the moment. The writable stream will let you know when you can start writing more data by emitting a drain event.

Calling the writable.end() method signals that no more data will be written to the Writable. If provided, the optional callback function is attached as a listener for the 'finish' event.

Using a writable stream you can read data from a readable stream:

You can also use async iterators to write to a writable stream, which is recommended

The default version of stream.finished() is callback-based but can be turned into a Promise-based version via util.promisify() (line A).

In this example, it is used the following two patterns:

Writing to a writable stream while handling backpressure (line B):

Closing a writable stream and waiting until writing is done (line C):

In Node 10.x was introduced stream.pipeline(). This is a module method to pipe between streams forwarding errors and properly cleaning up and provide a callback when the pipeline is complete.

Here is an example of using pipeline:

pipeline should be used instead of pipe, as pipe is unsafe.

The Node.js stream module provides the foundation upon which all streaming APIs are build.

The Stream module is a native module that shipped by default in Node.js. The Stream is an instance of the EventEmitter class which handles events asynchronously in Node. Because of this, streams are inherently event-based.

Due to their advantages, many Node.js core modules provide native stream handling capabilities, most notably: 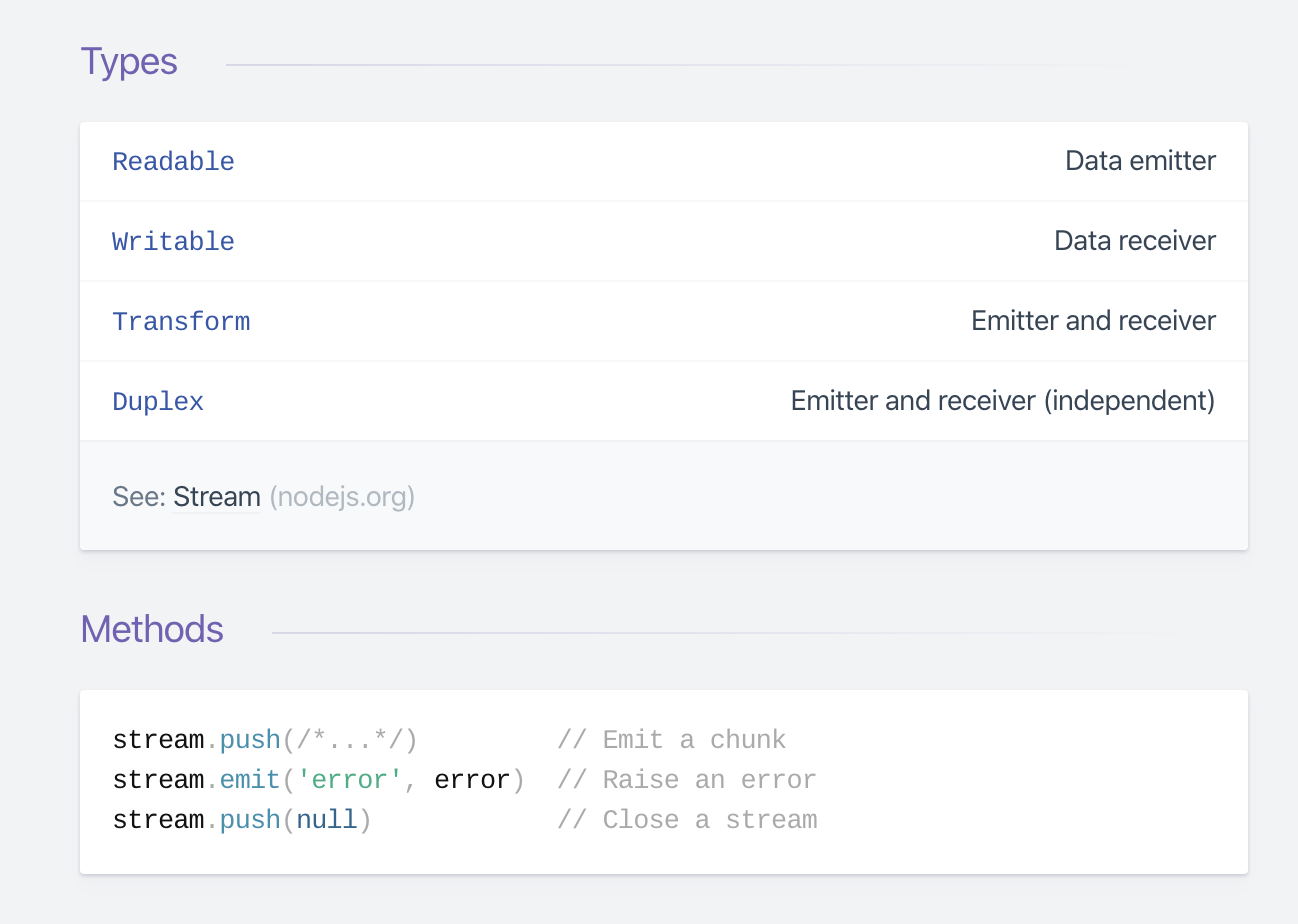 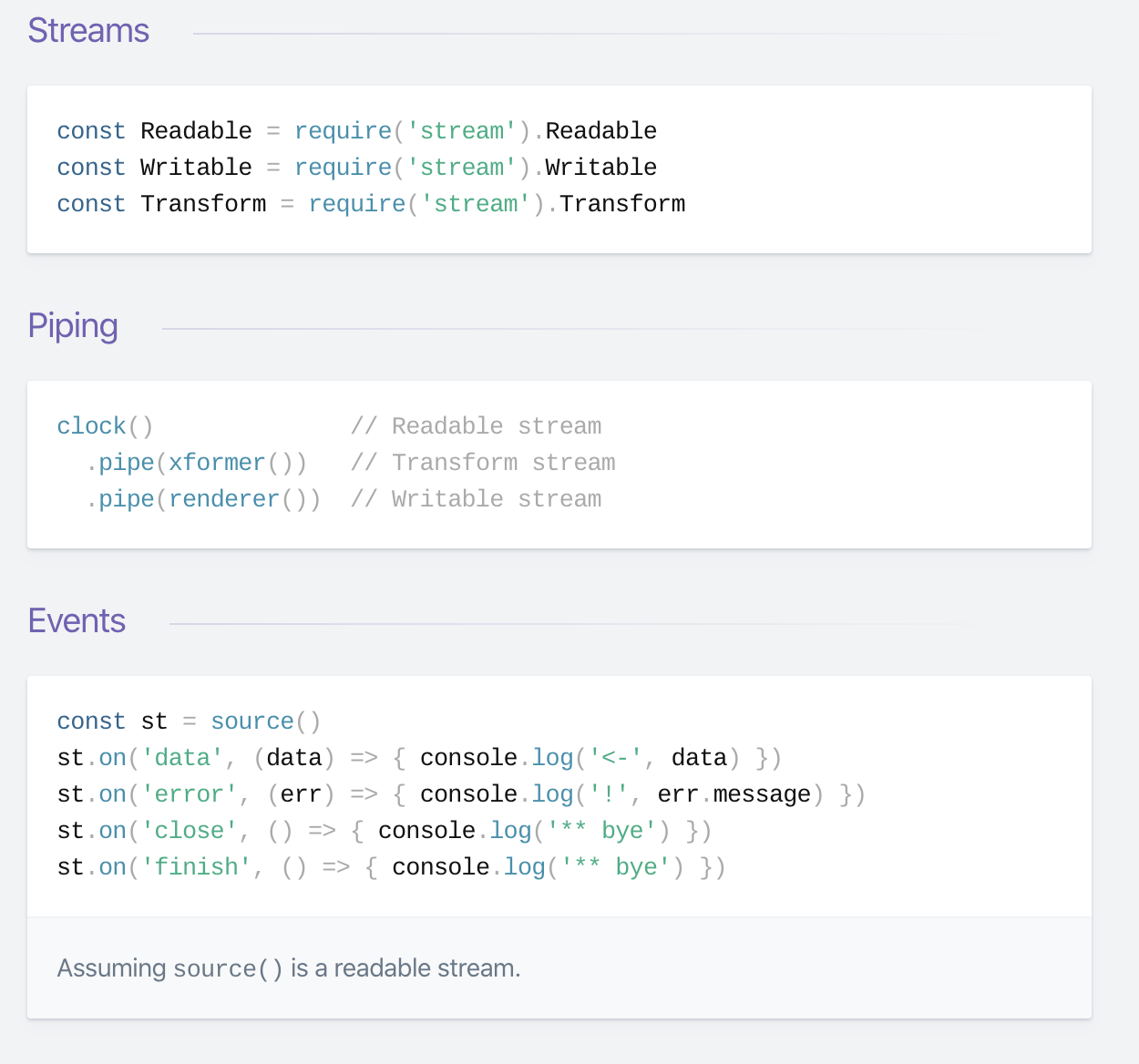 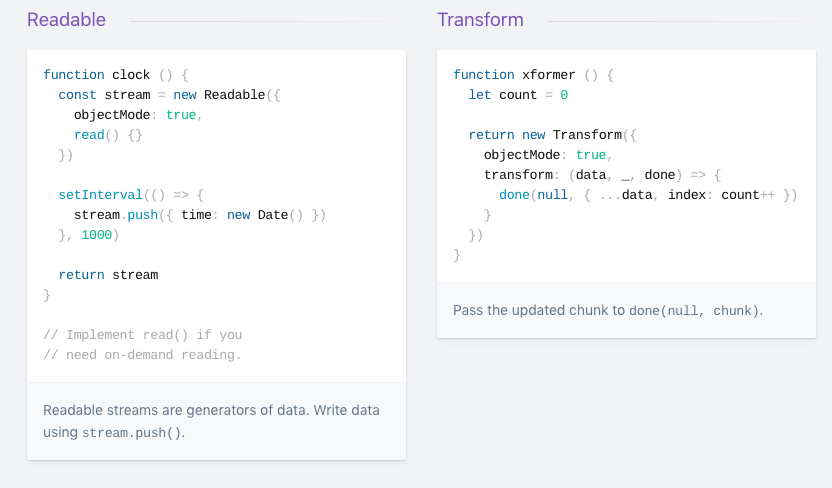 Here are some important events related to writable streams:

This was all about the basics of streams. Streams, pipes, and chaining are the core and most powerful features in Node.js. Streams can indeed help you write neat and performant code to perform I/O.

Also, there is a Node.js strategic initiative worth looking to, called BOB, aiming to improve Node.js streaming data interfaces, both within Node.js core internally, and hopefully also as future public APIs.

Special thanks to Matteo Colina and Jeremiah Senkpiel for your feedback!